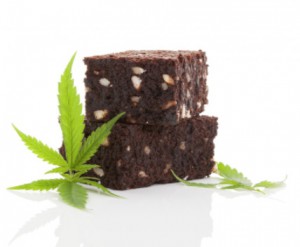 “Edibles” such as ganja brownies and pot infused salsa seem to be all the rage. Why are so many marijuana consumers interested in edible marijuana? In the state of Colorado, where pot is legalized, many are jumping at the chance to purchase new varieties of edibles.

With most people, ingesting marijuana seems to produce a much longer-lasting and stronger high than through smoking. An article in The Daily Beast gives a great explanation as to why this may be the case. The article states that there’s a difference in the way the body absorbs and excretes edible marijuana. “Understanding Marijuana” author Mitch Earlywine states, “In a nutshell, eaten cannabis gets metabolized by the liver, so delta 9 THC becomes 11-hydroxy-THC which passes the blood brain barrier more rapidly and has more of a psychedelic effect than standard THC.”

Marijuana gets into the body faster through smoking, but it stays longer if eaten. The effects of the THC from smoking marijuana can rapidly disappear, but when eating it, you can feel the effects anywhere from 6 to 10 hours. People who use marijuana for pain relief prefer to ingest it rather than smoke due to the long lasting effects.

While edibles are becoming a popular form of marijuana consumption, users must be careful how they utilize marijuana as it could affect the future of further marijuana legalization.